You’re Invited! Join us for the Midwest Premier of “The Sacrifice Zone” on 4/20 at 7pm 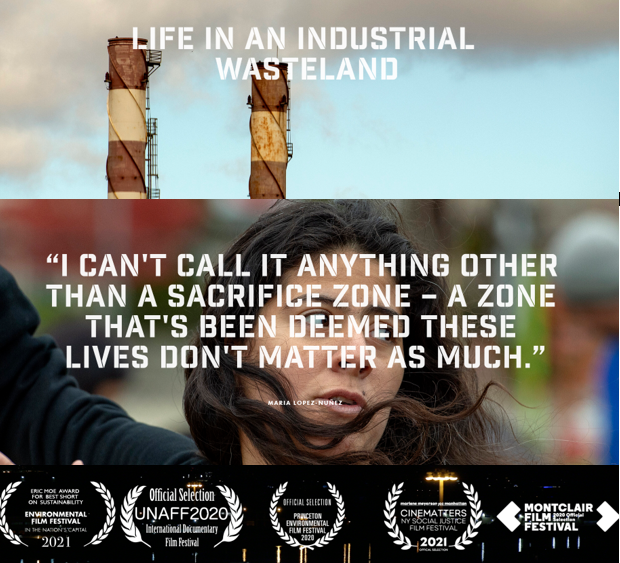 DWEJ is proud to be hosting the Midwest premier of the acclaimed short film, “The Sacrifice Zone”. This event will be a Zoom Watch Party on Tuesday, April 20 starting at 7pm. “The Sacrifice Zone” is a story about the fight for environmental justice in Newark, NJ’s notorious Ironbound neighborhood, considered to be one of the most polluted and toxic in America. It’s a powerful story of community action, resiliency and perseverance to create a better future.

Joining us will be Maria Lopez-Nuñez of the Ironbound Community Corporation and the White House Environmental Justice Advisory Council. Maria is featured prominently in the film and will be talking about it and her experiences leading a group of residents determined to break the cycle of poor communities of color serving as dumping grounds for our consumer society. Attendees will also be able to speak with Maria during the “After Party” Q&A session.

Kicking off the evening will be a screening of one of our own “Solar Stories of Detroit” short films. Series co-creator – and DWEJ Program Manager – Catherine Diggs will talk about the film and take questions from the audience. Joining Catherine will be Anita Sevier, Development and Alumni Relations Director from Gesu Catholic School, and a group of student alumni who led the project.

We are excite to bring you this exclusive event! We look forward to seeing you there. Don’t forget to invite your friends!

Get Your Ticket Here

Interested in sponsoring this event? Information can be found on the ticketing site. Click “Show Details” under each sponsorship level to learn more.

About the “The Sacrifice Zone”: As the film begins, Covanta, the largest incinerator on the East Coast which is located in the Ironbound, has just applied to renew its permit, which includes releasing ‘acceptable’ levels of dioxin and mercury emissions. Inside Covanta, we can see what 10,000 pounds of trash actually looks like, and how the facility produces energy from waste. The sheer volume of the problem is brought into sharp focus, and the exasperation of the neighborhood is palpable.

Maria has dedicated her life to challenging the current political system and holding polluters accountable while building resistance within her community. She is the “Erin Brokovich” of the Ironbound, investing everything she has for the sake of survival. She and her colleagues aren’t just fighting for their community, they’re fighting for us all.

Throughout the film, Maria and her fellow activists lead Toxic Tours that show the harsh reality on the ground. These tours move us through the neighborhood, where we experience firsthand the proximity of so many polluters concentrated in a small area. One of the stops on the Toxic Tour, the Passaic Valley Sewage Treatment Center, processes waste from 3 million people in the NY/NJ region. Urban planner Ana Baptista explains that during Superstorm Sandy an eight-foot tidal wave washed through the open waste-water pools in front of us, carrying sewage into the waterways, rivers and local residents’ homes. Shockingly, no significant precautions have been taken since then and the neighborhood is just one major storm away from catastrophe.

Maria is an inspiration as she continues to fight for environmental justice, policing industrial polluters, holding government agencies to task, and empowering her community to take charge of its own destiny. (Credit: Talking Eyes Media)