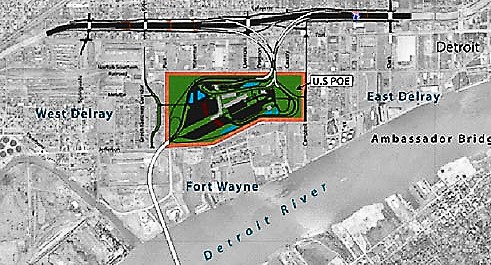 In the 12/9 issue of the Detroit News, DWEJ was interviewed about the work we have done in Delray in advance of the new Gordie Howe International Bridge from Detroit to Windsor. The 167 acre US terminal/Point of Entry will be constructed in Delray and will radically change the neighborhood, which has endured many struggles and challenges. The City of Detroit created the Delray Neighborhood Framework plan in response to to the construction of the bridge and its’ facilities. DWEJ was added to the project team to make sure environmental justice was incorporated into the plan and worked on the project from 2019-2020.

The Detroit News interviewed several people and groups associated with the project. Here’s an excerpt featuring our Communications and Data Manager, Brad Ashburn:

Detroiters Working for Environmental Justice is one of several organizations that has worked with the city’s consulting team and Southwest Detroit Community Benefits Coalition on neighborhood engagement. Delray has long been subjected to air pollution from nearby industries and exhaust from trucking on Interstate 75, said Brad Ashburn, Communications Manager for Detroiters Working for Environmental Justice.

“Our mission was to make sure that the people had a voice at the table. They’ve had a lot of issues,” Ashburn said. “What they are going to face going forward is the same, plus more truck traffic.”

Detroit News subscribers can access the article here
Learn about the Delray Neighborhood Framework Plan and our role here, part of our Programs and Projects page
Find information on the Gordie Howe International Bridge here

← New Content on Our YouTube Channel - "From the Bottom Up: Climate Action in Detroit" COVID-19's Continuing Impact on Communities of Color →