“Mother” is a short film by visual journalist Lauren Santucci, a one-time resident of the Delray neighborhood in Detroit. Delray is in Southwest Detroit and borders Michigan’s most polluted zip code. The film follows Thomasenia Weston and her family in Delray, who are dealing with the health effects of air pollution. Thomasenia raised her daughter and is now raising her two grandchildren in this house, and all three generations suffer from severe asthma.

Learn more about our work with the Delray Neighborhood Framework Plan. Subscribe to our YouTube Channel for more videos on Delray and other environmental justice issues in Detroit.

MOTHER from Lauren Santucci on Vimeo.

Speramus Meliora; Resurget Cineribus. We hope for better days; It will rise from the ashes”

– Motto of the City of Detroit 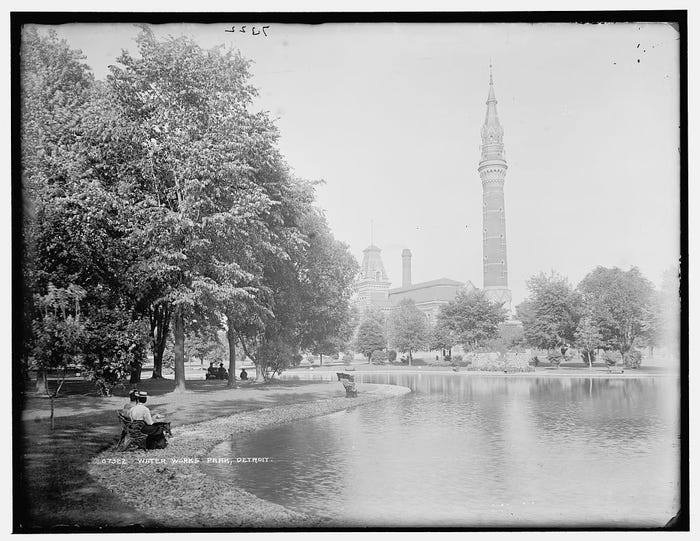 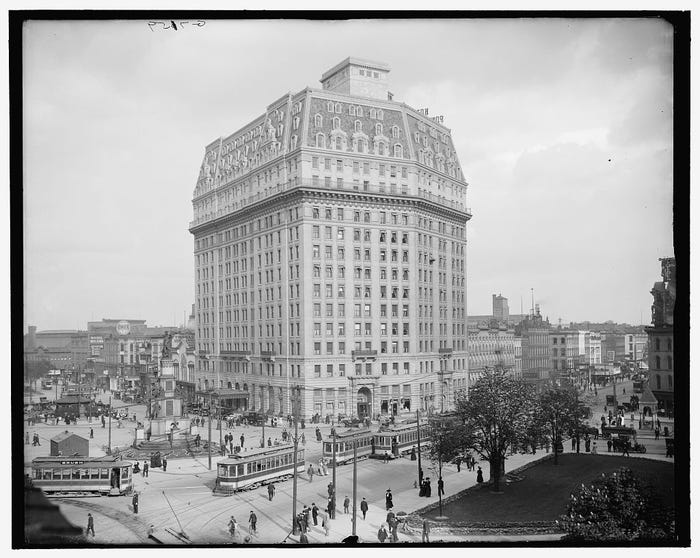 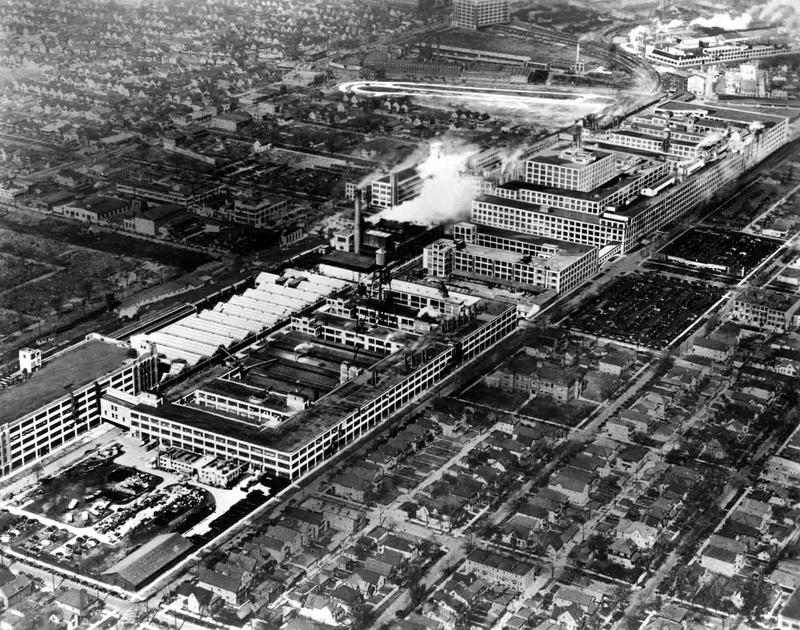 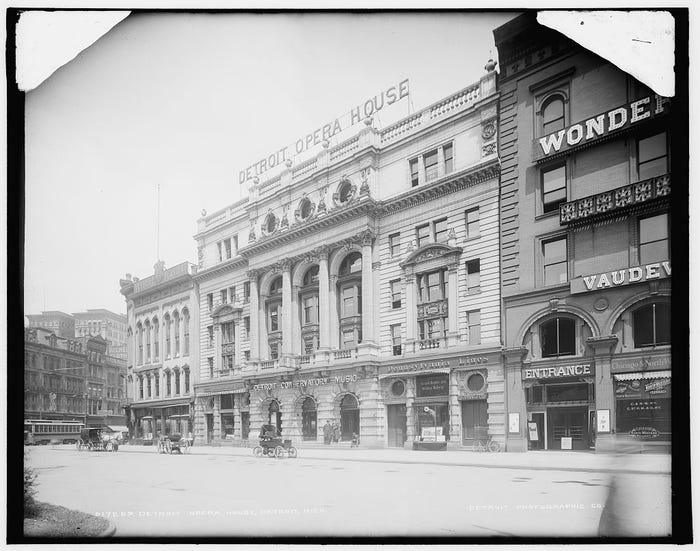 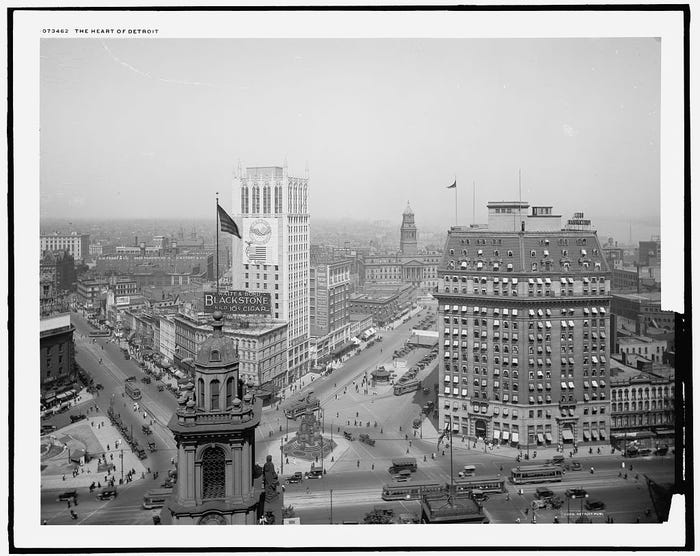 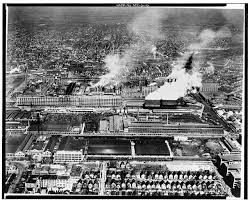 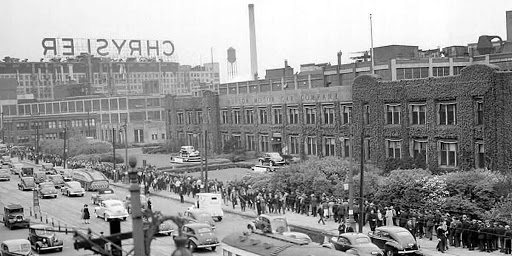 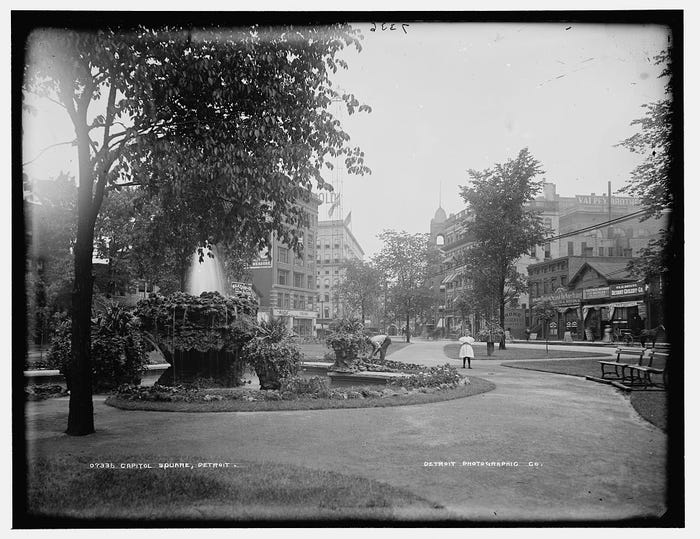 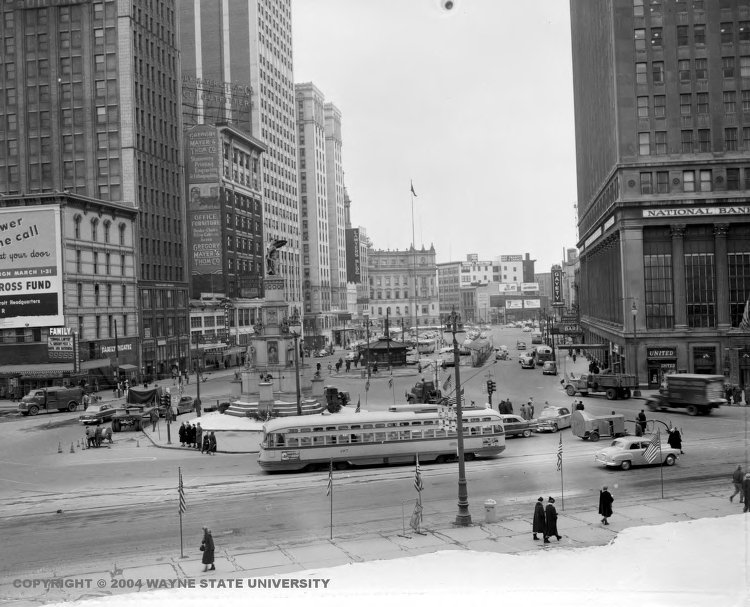 A Brief History of Detroit

Motown, The Motor City, Hitsville, USA, The D, The Paris of the Midwest, The Arsenal of Democracy, Hockeytown, America’s Comeback City.

Detroit has a long and rich history, holding an important place in American history and culture. Once only a small French trading outpost on the edge of the frontier, Detroit grew and gained prominence thanks to its prime location, the riches of natural resources in the region, and the people who called it home. In 1900, Detroit had a population of 285,000, but by 1930, over 1.5 million people lived here. The auto industry and WWII catapulted Detroit to the forefront of the world’s great cities. In the post-WWII era, Detroit was the wealthiest city in America on a per capita basis and had the highest standard of living in the world. The city boasted corporate headquarters, luxury hotels, opera houses and theaters, grand parks, and many other attractions.

Detroit’s economic success came with a heavy price. Decades of shortsighted environmental policy, along with the construction of manufacturing and heavy industry plants, polluted the air, land and waters of Detroit and its surrounding areas. Simultaneously, profit-driven and discriminatory social policies were put in place, such as redlining (the practice of banks and mortgage lenders excluding areas or neighborhoods, typically based on race, in which they do not want to make loans), restrictive land use, weakening public transportation, and the complete dependence on the auto industry for economic growth.

The result? Mounting racial tensions leading to the 1967 race riots, business downturns due to global competition, and the loss of people and jobs to the suburbs (commonly referred to as “white flight”), helped create a city steeped in poverty, inequality, and institutional barriers.

When Detroiters Working for Environmental Justice was formed in 1994, Detroit was in trouble—economically, socially and environmentally. By the 1990s, after a 50-year steady decline, it had become the poorest large city in America. Federal policies adopted during the 1980’s and early 1990’s defunded city resources and dismantled environmental protection policies.

In cities undergoing severe fiscal crises, like Detroit, these actions created a harmful legacy. Removing environmental safeguards allowed for the construction of polluting facilities close to residential areas, such as the Greater Detroit Resource Recovery Facility in 1986, the world’s largest municipal trash burning facility. This incinerator emitted thousands of tons of dangerous fine particulate matter, toxic lead and mercury, as well as unknown amounts of potentially cancer-causing dioxins into the atmosphere every year. As a result, the neighborhoods surrounding the incinerator, inhabited by majority low-income African American communities, had some of the highest asthma and lead poisoning rates in the city.

This legacy has been proven in multiple research studies, like the 2007 United Church of Christ follow-up to their landmark 1987 study, which found that Detroit has one of the greatest percentages of people of color impacted by environmental hazards compared to other communities. Another study completed in 2013 by the Sierra Club concluded that metro Detroit’s proximity to industrial pollution is an environmental injustice that constitutes a “human rights abuse.”

Even with the ongoing resurgence in the city, too many Detroiters face numerous environmental issues and injustices, including air and water pollution, water and power utility privatizations and shut offs, and lead poisoning. These injustices are widespread and can vary from neighborhood to neighborhood. 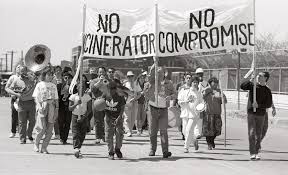 Detroiters pay two times more of their household income on energy than other Michigan residents.

The prevalence of asthma among Detroit adults is 29% higher than Michigan as a whole.

According to recent figures, 79% of Detroit residents are African American, the median per-capita income is $17,338 and it is estimated that almost 65,000 work days are lost every year to pollution-related illness. Those lost days add up to a $6 billion local negative economic impact. Studies have connected the high levels of pollution and contamination in Detroit to far higher levels of asthma, cancer, chronic illnesses, neurological disorders, and birth defects than the rest of the state and in comparable cities.

In a 2016 study, the Michigan Department of Health and Human Services not only found that the rate of adult Detroiters with asthma was 29% higher compared to the rest of the state but that the rate of asthma hospitalizations was 3x higher as well. The study also concluded that asthma rates in Detroit adults was significantly higher than the rate for children in Detroit, indicating the chronic condition was most likely a result of long-term exposure to adverse environmental conditions.

Pollution in Detroit has historically come in many forms, with sources like factories, steel mills, power plants, the now-closed municipal and medical waste incinerators, vehicle exhaust, and oil refineries. These and other sources of pollution have contributed to low air quality, while contaminated waste water, manufacturing discharges, leaks and dumping, as well as oil and chemical spills and runoff have resulted in water contamination. Industrial activities, dumping of chemicals and manufacturing waste, and other pollution sources also led to widespread soil contamination with numerous toxic sites and “brownfields” across the city. 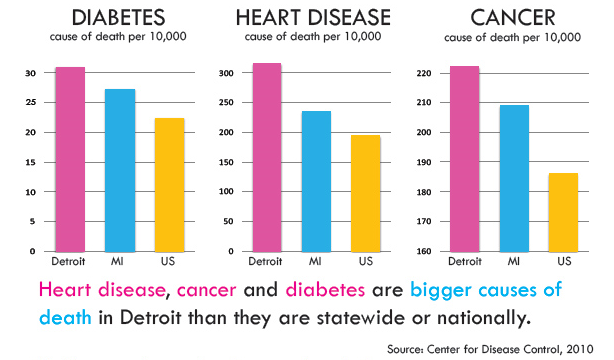 When environmental and health data is collected and put into easy-to-understand maps, the impact on and challenges facing Detroiters become easier to see. For example, the maps below show how negative environmental factors are the same areas where environmental justice “hot spots” exist, chronic illnesses are more common, and school performance is reduced. Researchers have also linked higher levels of air and environmental pollution to increased risk for infectious illnesses, especially respiratory illnesses like COVID-19.

The similarities between the maps below are not a coincidence.
Pollution and environmental injustice work together to decrease the quality of life and life expectancy for those who are subjected to them every day. 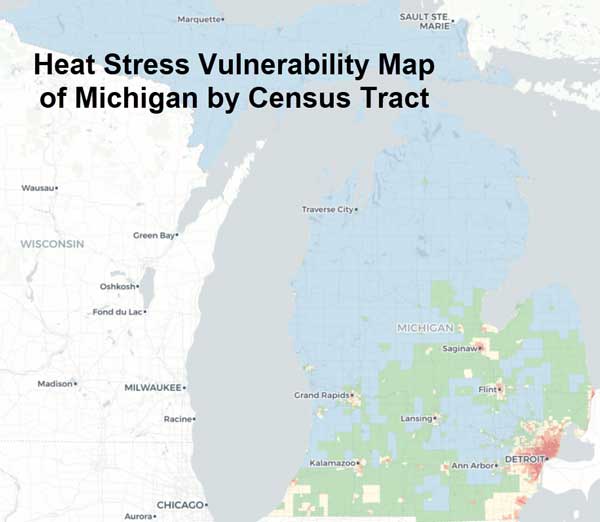 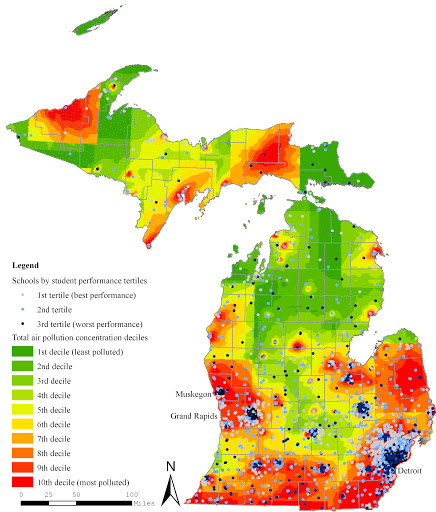 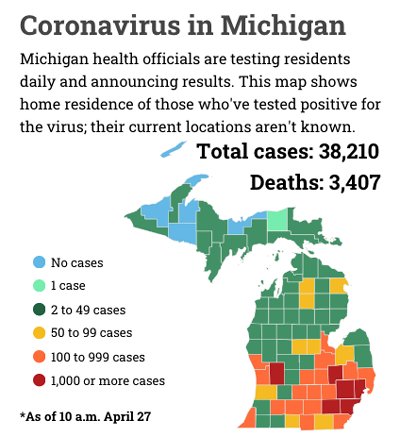 The good news —and there is good news —is that things are changing for the better. To paraphrase Dr. Martin Luther King, “the arc is bending toward justice.” Detroiters Working for Environmental Justice was the first environmental justice organization in Michigan, and today we have a diverse network of organizations, activists, residents, government officials and agencies to partner to solve the problems Detroiters face. Much progress has been made, but much remains to be accomplished.

Even better news is that while it used to be a struggle to get government and industry to sit at the same table with us, the success of the environmental and environmental justice movements in Detroit has led to an accepted — even expected — climate of cooperation and collaboration. The movement we helped launch in Detroit has spread across the state of Michigan. Its latest milestone came when Governor Whitmer appointed 21 members to the new State of Michigan Advisory Council for Environmental Justice.

While it may seem overwhelming, Detroiters Working for Environmental Justice, Detroit residents, other organizations, and the city itself, are making steady progress. The people of Detroit have stepped up, organized, spoken out, rallied and become their own champions, their own agents of change. We are proud to have helped them do this.

We can’t do this alone. You can help us make Detroit and Michigan healthy, clean and safe for all residents by signing up for our emails and action alerts,  and consider making a donation to help support our efforts. 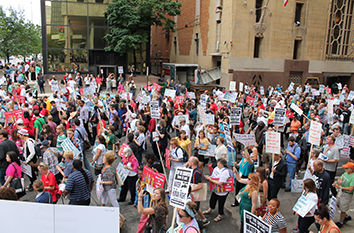 Let's fight for a clean and safe Detroit together.